Purchase your copy of the book today!

"Calling All Canines...And Their Owners" is written for the dog owner who wants to help their best friend become the balanced and happy dog they were born to be, and build that special bond between dog and owner that will last a lifetime. Not only has "Calling All Canines...And Their Owners" received five star reviews from its' readers, but it has garnered outstanding editorial reviews as well. Get your copy today!

"Calling All Canines...And Their Owners" is written for the dog owner who wants to help their best friend become the balanced and happy dog they were born to be, and build that special bond between dog and owner that will last a lifetime. Not only has "Calling All Canines...And Their Owners" received five star reviews from its' readers, but it has garnered outstanding editorial reviews as well. Download for Kindle and start reading today!

Of all the relationships we will form within our lives, the ones we forge with our dogs will undoubtedly be some of the most rewarding.

Calling All Canines loves hearing success stories of clients both past and present. Here are just a couple of the wonderful stories our clients have shared! Are you a Calling All Canines client and want to share your story? Submit your dog's story and photo here to have your dog featured on our website! 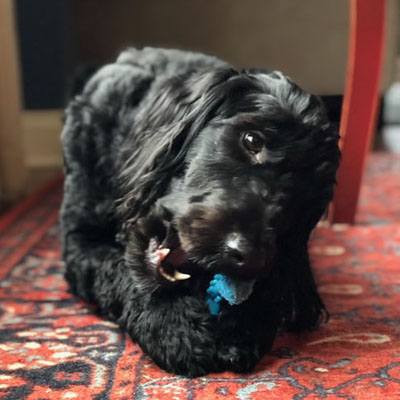 With three kids in the house, it is absolutely necessary to have a well behaved dog. We liked Sheri's training method because it is customized to the dog's personality, developmental stage, and based in dog psychology. Sheri taught our whole family, from kindergarten to high-schooler, so that we all understand how to get the best results from our dog. Today, we have a member of the family that walks beautifully, comes when called, and doesn't jump up. We are very grateful to Sheri for helping us so that we can enjoy our dog for a lifetime.

I’ve had dogs my entire life and I always wanted a yellow lab. One September day, I brought Cody, a male, yellow-lab home. When he was 4-months old I knew I was in trouble. He was HYPER. At first, I played catch in the house with him but he quickly outgrew that. When we tried to go for walks he had a blast but, not so much me, since I was dragged everywhere. It didn’t matter what collar or harness I tried, nothing helped.

He loved to CHEW everything. I know puppies teethe and need toys, which he had plenty of. He still chewed and ate everything. If it was on the floor or in his reach, it was fair game. It was unbelievable. It got to be ridiculous when I became his favorite chew toy and had to start using Neosporin as hand cream.

Training and obedience fell into place with my other dogs, however, that wasn’t happening with Cody. I needed help. Coincidentally, my niece had recently gotten a yellow lab and she had a trainer going to her house. I made an appointment not knowing it would change everything.

Sheri explained her experience and method of training. She asked what activities I wanted to do with Cody so we could incorporate that into his training. After the first session, I was amazed at the difference in him. He was calmer and I wasn’t being chewed on. I was committed from that day on.

My favorite part of working with Sheri is she taught by example. She didn’t take Cody away, train him then bring him back to me. Instead, she showed me what to do. For example, first, Sheri demonstrates a new command with Cody. Second, she walks me through the new command with Cody. Third, we practice the new command and other commands already learned. When she leaves, I’m confident to continue practicing the new and previously learned commands, all week. Over the weeks we work indoors, outdoors, with my car and at the park.

If I have any questions or a new behavior starts she’s a phone call away. She is available with advice even after the formal training is finished. I had concerns when I learned I was going to be a new grandmother because Cody has never been around infants. I called Sheri, followed her advice and when my infant grandson came over, Cody handled it like a pro. They were best buds until Cody passed away.

When I was ready for a new dog the first person I called was Sheri. She made all the difference with Cody and I’ll never go back. 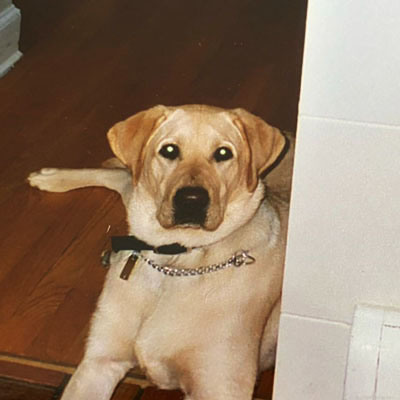 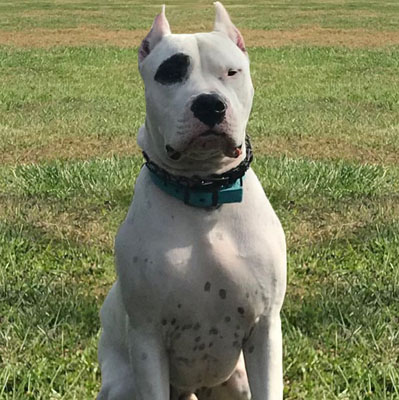 I wanted to reach out to let you know how transformational your training has been on our household. I would highly recommend your training to anyone raising any type of dog, especially a large, guarding breed. After interviewing several “certified dog behaviorists” and paying them for an evaluation and treatment plan for my dog, I could not believe what I was hearing! These so-called “certified behaviorists” with official paperwork from the Certified Council for Professional Dog Trainers credentialed in “Behavior Adjustment” spent hours analyzing my dog to create a customized training program. They charged me for their evaluation and their treatment plan which consisted of things like “desensitization” techniques and the use of treats to “recondition” my dog. I was even told it was going to be a challenge to correct my dog’s behavior because I had not socialized him properly as a puppy.

This all started after my Argentinian Dogo reached 18 months old and he surprised me by growling at more than one of my teenage daughter’s friends! This was a marked change in his behavior and one I knew I needed help with to quickly nip in the bud. These so-called certified trainers absolutely insisted that I DO NOT correct this behavior in any way without using proper training techniques that only truly “certified behaviorists” were equipped to provide or I would make the situation worse. They emphasized if I didn’t start to quickly follow their proven methods using treats and “desensitization” that I would have a serious issue on my hands.

Thankfully, after wasting my time and money on 2 of these consultations, I was speaking to a friend and he had strongly recommended I call you for an evaluation. You spent about 30 minutes with me, listening to the situation and you immediately and confidently convinced me you could help. You explained how you would train my wife and I to show our dog that we were in charge so that he felt protected and comfortable that we had his back. Once he understood his place in our household, he would be more comfortable in dealing with strangers and he would have no reason to growl. Your confidence, clearly based on decades of solid experience, made it easy for us to select you as our trainer. It was the best decision my wife and I could have made!

It has been 6 months since we finished with your training and we have had many visitors to our house during that time, several of them friends of my daughter’s. We had company on multiple occasions over the holiday including both friends and family. We didn’t experience a single incident of growling. Not only that but your training techniques enabled us to confidently introduce our dog to strangers and provide us with options for enjoying our company and our dog at the same time. The dog is visibly more comfortable and so is the rest of our family! It has been a fantastic 6 months!